(July 3, 2018) In the morning, Ryan Van Kirk wakes up, gets dressed, grabs a cup of coffee and gets ready for his 75-mile commute from Venice to Tampa. 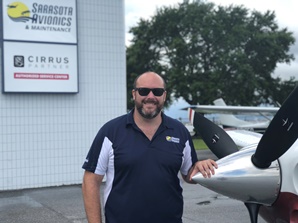 It takes about 20 minutes, tops. He hops in his plane, enjoys the beautiful view over the Gulf Coast and lands just steps from his office in a hangar at Peter O. Knight Airport.

“Aviation is a happy thing,” said Van Kirk, co-owner of Sarasota Avionics. “I love what I do and I love flying. You just fade away from the world when you’re up there.”

Flying, you could say, is in Van Kirk’s blood. His father, mother and grandfather were all pilots, and when Van Kirk was a kid, his father got into the avionics business, opening Sarasota Avionics, which is headquartered at Venice Municipal Airport. The company first began as a sales shop and has expanded into avionics upgrades, panel mount installation, maintenance and repair.

Sarasota Avionics now has five locations around the state, including its newest installation and repair center at Peter O. Knight on Davis Islands.

“This is really a special airport,” Van Kirk said. “I knew the first time I came here that this is where we wanted to be.”

The shop, which is a Cirrus Service Center as well as an authorized service center for Cessna, serves customers from all over the Southeast region and some from as far as Michigan and Utah. Van Kirk said the company prides itself on being able to work on just about every type of plane, be it single engine piston, double engine or turboprop.

“We want to work on everything,” Van Kirk said. “And what we do work on, we want to do it well.”

The avionics and aviation repair business is very much based on trust, he said, and he loves that Sarasota Avionics often has clients who return for their second or third major upgrade. At the Peter O. Knight location, the company has worked to build that kind of trust with an entirely new customer base.

“When we first showed up here, we didn’t have a single customer in Tampa,” Van Kirk said. “It has taken some time to build those relationships, but it’s very gratifying to now have that base here. We try to be good stewards here, to support the FBO and to be fair on price and go above and beyond for our customers. That’s the key to gaining that trust.”

The company has grown its Peter O. Knight operations and hopes to be able to grow even more and stay on the island “for the long haul,” he said.

When Van Kirk isn’t spending his time in one of his hangars or in the air, he is spending it with his wife, Kelly, and four children: 10-year-old Olivia, 7-year-old Amelia, 2-year old Charlotte and the newest baby, 7-month-old Cole.

He often takes his children along on short trips in his plane, hoping they catch the aviation bug like he did.