(March 15, 2018) When it comes to Tampa International Airport’s retail world, Patrick Lampasso is a walking encyclopedia. The Stellar General Manager started out with HMS Host as a retail assistant manager in 2006, back when Host operated all concessions at TPA, and over the years Patrick managed every single retail concept at the Airport. Whether it was sunglasses or sportswear or pet products or fine jewelry, Patrick came to understand the ins and outs of airport shopping habits better than anyone. 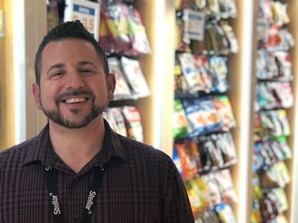 “I like the pace of it,” Patrick said. “It’s great being able to help customers find what they’re looking for in a short period of time.”

After the concessions redevelopment, Patrick went on to be a General Manager for Stellar, which operates several concepts around TPA, including the Stellar Bay news convenience stores, Ron Jon Surf Shop, the TUMI/Swarovski store and other shops. Patrick manages all but the Mindworks-Tampa Bay Sports store in the Main Terminal and you can often find him running around, working with customers, training staff, straightening snack shelves, re-folding shirts and other tasks that now come to him naturally.

Patrick’s hard work – as well as the excellent sales numbers at TPA – have not gone unnoticed. Recently, Patrick was named Stellar’s 2017 Manager of the Year for the entire organization, which spans several airports across the country.

“Stellar is a great company and I’ve watched a lot of employees grow here as it’s a company that likes to promote from within,” Patrick said. “A lot of the people who work for me have worked with me for years, growing from sales associates to supervisors. We take a lot of pride in our team and it makes a big difference in how we work and how we treat our customers.”

Even before coming to work at TPA 12 years ago, Patrick was very familiar with TPA and the Airport’s reputation. Born and raised in the Clearwater area, his family would take big summer trips every year to places around the world, including Italy, where his father is from. He remembers riding the shuttles and being greeted or greeting visiting relatives at the gates in the pre-TSA days.

When he was 16, Patrick was excited to land his first job at his neighborhood Walgreens. He wound up staying with the company for 10 years, working his way up to an executive assistant manager position by the time he left.

After graduating from the University of South Florida St. Petersburg with a bachelor’s degree in management and marketing, Patrick finished his Walgreens career and set out to find something new, though still loved retail. He landed with Host as a retail assistant manager and spent most of the next several years at TPA with Host and World Duty Free Group, which took over retail operations at TPA prior to the concessions redevelopment program. Aside from a two-year stint in Atlanta and Richmond working for Host and, briefly, a tobacco company, Patrick returned to TPA in 2016 and has enjoyed watching the transformation of the Airport in the last year.

“This Airport feels like a community,” Patrick said. “Everybody knows everyone, and if you don’t know someone, you’ve at least seen them around and get a smile and a wave. What I like most is the diversity and the employees who come from all walks of life.”

Patrick recently bought a townhome in Lutz, having spent most of his life in the Seminole area of Pinellas County, and he’s very close with his father, brother, sister and five nieces and nephews. The whole family often travels together, and Patrick himself loves traveling when he’s not working, noting that his favorite spots are Cape Cod and Las Vegas.

Ask and Patrick will gladly show you photos of the two loves of his life – a rescue Maltese, whom he recently had to put down after the dog became old and diabetic, and his elderly Shih Tzu named Duke.