Growing up in Wynnewood, Oklahoma – population 2,500 –Maintenance Senior Manager Pat Campbell had a fun childhood, riding motorcycles and flying light aircraft with his dad using a 3,000-foot grass landing strip on the family’s pasture.  They had to make one pass to shoo off the cows before they could land. 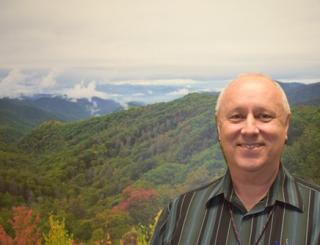 Pat’s real passion, though, was the arts. Pat inherited vocal talent from his mother, singing baritone in a barbershop quartet and choir. He also played trumpet and guitar and loved painting, drawing and sculpting, inspired by his art teacher he had throughout grade school.

Pat went to a small college as an art major before transferring to Oklahoma State University and realizing “you really can’t feed yourself as an artist,” he said. He switched his major and graduated with a B.S. in Architectural Studies.  His choices after that were to either take an entry level – and potentially boring – job with an architectural firm or continue with school for a Master’s degree. “I was tired of paying tuition,” Pat said. “I always worked throughout college so I was debt-free, but I was also broke.”

So Pat joined the Navy, earning his commission after going to Officer Candidate School in Newport, Rhode Island. He was somewhat living out the dream of his father, who had always wanted to be in the military but lost an eye during a bout of measles as a child so he never qualified.

Pat’s lack of 20/20 eyesight prevented him from being a naval aviator so he requested to be on an aircraft carrier in San Diego. He was assigned to the USS Constellation, joining a crew that was twice as big as his hometown. He served two years and two WestPac cruises aboard the carrier, earning his Surface Warfare qualification and getting to stand on deck behind President Ronald Reagan once during an airshow.

Most importantly, it was during his years aboard USS Constellation that a friend set him up on a blind date with a young naval officer named Kim, who was assigned to the North Island Communications Station. A year and a half later, Pat and Kim were married in Kim’s hometown of Brandon, Florida.

As Pat and Kim’s naval careers progressed through various promotions and duty stations, they owned six homes and rented three more, all  of which were in California and Florida. The two also continued their studies as Pat earned his MBA at the University of West Florida and Kim got a Master’s degree in Education at Stanford University, and later, a Doctorate of Education.

In between all of that, they had a son named Matthew, now 32, and a daughter named Erin, 28.

Pat left the Navy in 1990, settling the family in Pensacola where he worked as the Facilities Superintendent at Pensacola Regional Airport for a couple years. Kim continued her years of service, including some time away from her family while stationed in Mississippi.

Six years later, Pat was hired as the General Manager II Facilities Superintendent at Tampa International Airport and Kim was offered early retirement from the Navy, which she happily accepted. The family moved to Tampa, and at last, the couple felt like they had finally settled down.

In his 20-plus years with the Authority, Pat has seen various remodels and rebuilds of airside terminals and other airport projects. He also remembers having one of three computers used by his department, on which all requisitions were tracked in an Excel spreadsheet.

Over the years, Pat has become very close with his co-workers, as several maintenance managers owned motorcycles – calling themselves the Wild Hogs – and they took annual trips to ride the twisty mountain roads in North Carolina. Pat has fallen in love with the Smoky Mountains and hopes to eventual settle there with Kim after retirement. Across from his desk is a large canvas photo he took of the Blue Ridge Parkway’s tree-covered mountains during the changing of the leaves.

Pat and Kim now have two grandsons, ages 10 months and 13 months, with whom they love spending time.

Pat still enjoys art and working with Photoshop, and he still sings from time to time, just around the house.