With a bubbly laugh and a curious nature, Marketing Manager Kelly Figley is one of the more recognizable faces around Tampa International Airport. She rarely comes across a fellow employee she hasn’t met yet, and if she does, she stops and introduces herself. 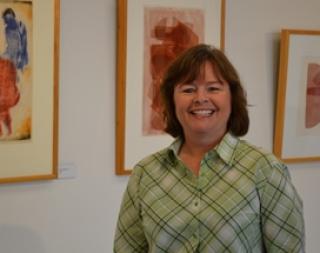 And she’s a good one to know. Her institutional knowledge of TPA goes back quite a bit.

An aviation buff and licensed pilot, Kelly came here from Buffalo, Minn., 24 years ago as an interning Airport Operations Specialist after graduating from University of North Dakota. She thought it would be fun to hang out in Florida and “listen to Jimmy Buffett, drink margaritas,” then head back up north. She didn’t realize she would be meeting her future husband, also a young pilot, at the original Green Iguana and staying in the Tampa Bay area for much, much longer.

Kelly, who got her degree in Aviation Administration and grew up with a general aviation pilot father, rotated through different departments as an intern in Ops for a while.

“It was so cool being able to drive up and down the runways,” Kelly said. “I loved it.”

After her internship was over, Kelly went after a full-time opening in the Ground Transportation Department. She loved seeing how an entirely different but important part of the airport worked and was a Ground Transportation Manager for a number of years before eventually moving into Guest Services as a Public Information Coordinator.

She learned public relations skills, which fit well with her friendly personality, and remembers one of her first big challenges on the job: September 11, 2001. With very little experience working with the media, as well as a 1-year-old baby at the time while her husband Pat was stuck in another city, she learned at a breakfast meeting about the terrorist attacks and how they might affect airports for the day.

Kelly became one of the main point people coordinating a crush of media coverage at TPA in the days that followed and, along with Brenda Geoghagan, served as a spokeswoman as the airport moved forward with security changes and other efforts new to the airport at the time.

Kelly worked in Guest Services up until a few years ago, when she joined Vice President Chris Minner’s team in Marketing. There, she wears many hats, including coordinating partnerships and promotions, handling the rotating art displays and – perhaps most importantly – serving as the Aviation Authority’s United Way Suncoast campaign coordinator. 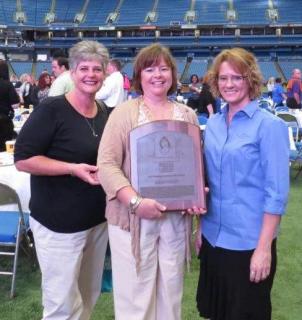 After organizing TPA’s third 5K Runway Fun Run and helping the airport raise more than $96,000 for the charity, Kelly was inducted into the United Way Suncoast’s Coordinator Hall of Fame last week – an honor she felt a little apprehensive accepting.

“The Hall of Fame award really goes to a lot of people at the Authority,” Kelly said. “I’m just one of the coordinators here, and the fundraising efforts are the work of the chairs of the campaigns, huge group of people who work on the 5K Planning Committee, the employees who contributed and the runners and raffle ticket buyers at the 5K.”

Still, Kelly was thrilled to accept the honor on behalf of the Authority and looks forward to an even better campaign next year.

Kelly has three children – 14-year-old Colin, 12-year-old Olivia and 10-year-old Noah – and has been married to Pat for 19 years. Like their parents, the Figley kids are also fascinated with flying, and Colin hopes to start working on his pilot’s license soon.

Kelly loves visiting her family up in Minnesota, spending time with her kids especially out on the water sailing, kayaking or boating and trying out new and daring things – especially if they involve being in the air. She often tells stories about the various aircraft she’s flown had the opportunity to ride in, as well as the time she went skydiving.

But she’d rather not talk about herself most of the time. She’d rather hear more about you.

“I love hearing other people’s stories,” Kelly said. “There are so many fascinating people who work right here at the airport.”