(February 2, 2017) When it comes to airline loyalty, it’s hard to find anyone more dedicated than John Lucht. The United Airlines General Manager at Tampa International Airport has moved all over the country, bringing his wife and kids along with him to settle in different cities and roles with the airline. 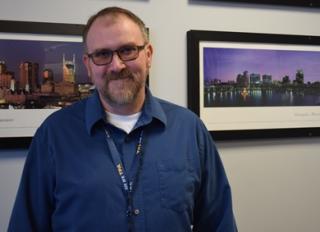 In his 27 years with United, beginning his career as an aircraft cleaner, cleaning planes overnight, Lucht has seen more changes, transitions, mergers and new developments than most who work in the industry. He’s worked the ramp, helped customers book tickets, hauled passengers’ bags around, managed United workers, controlled gate traffic from the tower and done just about everything except fix the planes.

Now he and his team at TPA are getting ready to help shepherd in a new milestone: launching the first-ever nonstop service between the Tampa Bay area and San Francisco. The daily United flights begin Feb. 16 and are expected to be popular among both business and leisure passengers who regularly travel between the two coasts.

“We’re just ecstatic about the new service,” Lucht said. “We’re so thankful to the community and to the Authority for the support in bringing these flights here and fulfilling a need for our passengers. It’s really been a team effort all around.”

Lucht feels fortunate to have such a long and rewarding career with United, having grown up with “aviation in my blood,” he said. Born and raised in Fort Lauderdale, Lucht’s father worked as a mechanic for Eastern Airlines for 25 years so Lucht recalls always being around planes and getting to fly often.

He knew he wanted to work for an airline and attended Embry-Riddle Aeronautical University in Daytona Beach, getting his associate’s degree in Aviation Management. He landed his first job cleaning planes for United at Miami International Airport, working his way up to ramp agent. After about a year, he transferred Denver to take a position working in customer service, handling baggage, gate services, ticketing and other duties at the old Stapleton International Airport.

After two years in Denver, he moved back to Miami as it was growing its Latin America routes, then back to Denver as the newly built Denver International Airport opened. There, he worked in a special air traffic control tower for United and worked as a gate controller, overseeing everything from maintenance to catering to customer service to ramp management

Lucht stayed in Denver for five years before deciding to get back to what he calls the “front lines,” interfacing directly with customers. He took a supervisor position at the Nashville airport briefly, then went to Orlando International as a customer service supervisor. In 2003, he then went to the Albany airport to take his first General Manager position before transferring in 2005 to Tulsa International Airport in Oklahoma, where he and his wife were able to stay and let their two teenagers attend high school in one city.

After that, he and his wife made a brief stop in Orlando again for a year as United and Continental Airlines merged. And from there, they finally arrived in Tampa in 2012, where Lucht loves working at TPA and hopes to stay for years to come.

“The airport Authority in Tampa is phenomenal and so customer focused,” Lucht said. “I’ve never worked anywhere in which the airlines have such a strong connection to the Authority. And I’ve been to a lot of airports.”

Lucht knows having such a long career with one airline is unusual these days and he credits United – as well as his wife and kids for being so flexible during every move – for allowing him to grow from aircraft cleaner to GM.

“There’s ups and downs, just like with anything, but United has been like my family,” Lucht said. “I’ve been lucky to work with such phenomenal people and I’ve loved being able to fly to a lot of places and meet so many of our customers.”

Lucht and his wife Jackie – whom he married when the two were 20 years old – live in Land O’Lakes and have two rescue dogs, Zoey and Faith. Lucht loves college and pro football, and he and Jackie like to go on long walks with the dogs.

Lucht also likes traveling, to see his kids and grandson.  His 25-year-old daughter Brittany, still lives in Oklahoma and is getting married in October. His 27-year-old son Ryan and daughter in-law Ashley, live in Albany and have a 4-year-old son Matthew – Lucht’s first grandchild.