(June 22, 2017) As a teenager growing up in Toledo, Ohio, Gail McCluskey overheard a friend talking about her vacations in Florida and thought it sounded interesting. Just before turning 18, she packed up a few belongings, walked out the door with $32 in her pocket and hitchhiked her way down to the Sunshine State. 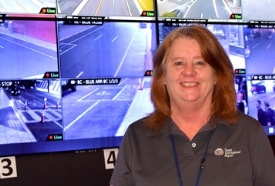 When she finally found herself at a stop in Tampa, she thought, “This looks good.” And there she stayed for the duration of many life changes, including marriage, motherhood and what has now been a 19-year career as an Airport Dispatcher for Tampa International Airport.

Not long after Gail settled in Tampa, she found a home and landed a job as a bar maid for ABC Liquors, which had attached lounges and bars back then. She was promoted to be a trainer, traveling all over the region to help other bars get started.

She also met John, whom she married and soon after had her son, Jason. But five days after Jason was born, John suddenly died of complications from diabetes. Gail’s world was turned upside-down as she found herself grieving and now a single mother.

Gail quit the bar business and eventually transitioned into a seven-year career of temp work handling circuit problem calls for AT&T and as a receptionist for GTE Communications. She also worked as a switchboard operator for NationsBank.

As her son got older, Gail decided to go into nursing so she went back to school, took some college courses and eventually working as a CNA for LifePath Hospice. But she found the work to be emotionally draining, and while caring for one of her patients that was a former police officer, the patient’s son began talking to her and suggested she look into applying for a law enforcement dispatcher position with Hillsborough County Civil Service.

Gail promptly went and applied, and not long after, she received a call about an Aviation Authority dispatcher position. The day she interviewed, she had laryngitis and could barely speak.

“Here I was interviewing for a communications job and I could barely talk above a squeak,” Gail said. “I thought, ‘I’m doomed.’”

But because of her experience working switchboards and service calls, the Authority offered Gail the job. Nineteen years later, she still works happily as in the Airport Operations Center, handing calls, helping passengers and creating work orders for Maintenance.

Gail said she loves the customer service aspect of the job and that every day is different. Being at the heart of the airport’s daily operations for nearly two decades, she knows the facility inside and out and has handled every type of issue, question and transition.

She especially likes working with Shannon Boos, Senior Manager of the AOC.

“Shannon has a no-nonsense, I’m-going-to-get-it-done style of leadership, and that’s what you need in Communications,” Gail said. “I enjoy coming to work knowing she’s in charge.”

Gail lives in Town ‘n’ Country with her rescue dog, Charlie, and she likes gardening and playing pool. She loves remodeling and tackling do-it-yourself projects, recently finding a discarded dresser on the side of the road and turning it into a beautiful bathroom vanity.

Gail also loves spending time with her son Jason, now 38 and living nearby in Tampa.