As the new Maintenance Manager of Contracts, Chuck Allen oversees Tampa International Airport’s janitorial contracts, window cleaning contract and keys to all of the airport’s locked doors. It’s a big job that’s about to get much bigger as the Airport expands to create a lot more square footage, a lot more glass and many more doors as it welcome several new tenants aboard. 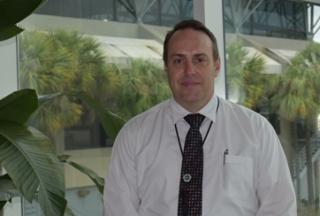 Chuck seems up for the growing responsibility. Since he began work as a multi-trades helper at the Hillsborough County Aviation Authority nearly 19 years ago, he has steadily worked his way up through different Maintenance and Planning & Development positions, including as a Construction Management Inspector, a General Manager, a Senior Supervisor of Central Records, and his last job as Airfield Maintenance Superintendent.

“Tampa International Airport has just been a great place to work,” Chuck said. “When someone can come off the street and grow their career here like I did, it’s a remarkable thing – a blessing.”

Chuck grew up in in Kentucky, one of three children to a tobacco factory worker father and a mother who worked for the Dollar General Distribution Center. After high school he joined the Marine Corps and spent time stationed in the Middle East during the Gulf War.

After Chuck returned, he attended Louisville Technical Institute and got a certification in marine mechanics, then studied at a community college where he met his future wife, Tracey. While still dating, he and Tracey decided to move to her home state of Florida.

“I had certification to work on boats and I knew Florida would be a good place for that,” Chuck said.

Tracey taught school in Manatee County for a year before deciding to go to nursing school at St. Petersburg Junior College, while Chuck worked as a mechanic at various marine shops. After a few years, Chuck decided to get a more stable job with benefits and applied for the multi-trades position with the Authority. He joined TPA’s team in November of 1997 and has since been involved in several developments through his various roles in Maintenance and P&D.

“I’ve had a very unique experience getting the chance to wear so many different hats and seeing how the Authority works as a whole,” he said. “And when you get to ride around the airfield right next to airplanes … that never gets old.”

Chuck enjoys putting in a hard day’s work, but even more, he enjoys going home to his little piece of paradise – a five-acre farm south of Sun City Center, which he shares with Tracey and his three children, 16-year-old Ashley, 13-year-old Hunter and 7-year-old Caleb.

The family raises chickens and the “occasional cow or two,” and they have enough land and privacy to shoot guns – the whole family loves to hunt and fish – and ride 4-wheelers.

“It’s the kind of place where you can look up and see the stars,” Chuck said.

You can also hear lions roaring in the distance. The family’s property is about 300 yards from a wildlife sanctuary.

When they’re not taking the children hunting, fishing and camping, Chuck and Tracey are very active with their church, First Baptist Church of East Bay, and they operate a “bus ministry.”

Every Saturday, they make their rounds to check on about 20 children who live in the Riverview and Gibsonton areas. Every Sunday, they drive a school bus around and pick up the children to bring them to church.

If Chuck has any spare time outside of work, the bus ministry and spending time with his family, he likes to keep his old skills sharp. He enjoys working in a little shop he has on his property, where he repairs cars and boats for friends.