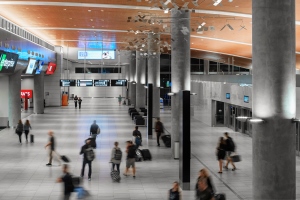 The milestone comes on the heels of United Airlines’ recent announcement that the carrier is increasing its Tampa-San Francisco service in June 2019 from once to twice daily, better serving the needs and schedules of the Tampa Bay area’s many business travelers who use the route. Lufthansa will also be increasing its service from five to six days weekly next summer, and at the end of the month TPA will launch Norwegian Airlines service to London, TPA’s first time having two airlines flying to the same European city.

Other factors adding to the growth include:

The boom in passenger numbers is also happening as TPA is in the middle of a three-phase Master Plan expansion. Earlier this year, TPA opened a new rental car center with a 1.4 mile SkyConnect people mover system and an expanded main terminal with outdoor terraces. The Airport is now in the planning and design phase of expanding its curbsides and building a new commercial office and hotel complex to the south of the Airport. Plans for future development that include an Airside D are underway as part of a third phase.

More passenger growth is expected for Fiscal Year 2019, during which Delta Airlines will launch nonstop service to Amsterdam along with other increased frequencies and new routes on existing domestic and international carriers.