(June 4, 2015) - The Hillsborough County Aviation Authority wrapped up a successful giving campaign in May with a record contribution to the United Way Suncoast of $96,215.76. 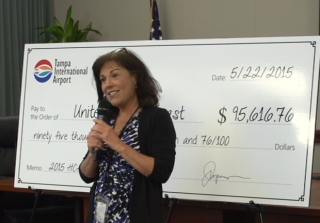 Employees surely gave because it’s important and for a good cause. But they could have been tempted by the prizes.

Two teams earned pizza with the CEO for 100 percent participation: IT and a group comprised of the CEO’s office and the departments of Marketing, Internal Audit, Legal Affairs, Real Estate and Media & Government Relations.

The Traffic Division came up with their own creative internal challenge to raise additional funds for United Way Suncoast that resulted in Traffic Manager Rob Rinehart and Police Chief Paul Sireci getting a pie in the face at the June 3 roll call. The department challenge raised an additional $186 for the campaign.

This year’s efforts follow a long tradition of giving at Tampa International.

In the past decade, the Authority has contributed more than a half a million dollars to United Way. Last year, the Authority was listed as one of the most generous work places in the region.