(November 2, 2017) While Sheila Welsh spent most of her life growing up and working in California, she always dreamed of moving to one of two places: Hawaii or Florida. 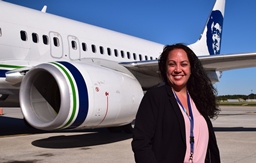 So when an Alaska Airlines station supervisor position opened in Tampa, she felt it was meant to be. She was “wearing many hats” for Alaska Airlines at Santa Barbara Municipal Airport at the time and loved her job there, but Tampa was launching a new route to Seattle in June 2014. She went to her boss, who knew Sheila had always wanted to go to Florida, and got his blessing to apply.

“From that day until the day I got hired, I would crank up the song ‘Best Day of My Life’ in my car,” Sheila said. “I just felt so good, and I knew. I knew everything was coming together.”

Sheila soon found herself looking for a place to live and getting to know a brand new staff in her dream state. Her fiancé James soon followed and they quickly settled into a new life in the Tampa Bay area.

“It was exciting and scary,” Sheila said. “And a huge culture shock.”

As a kid, Sheila loved animals and thought she’d grow up to be a veterinarian. She also got involved in sports as a high school swimmer, soccer player, kicker on the football team, and later, a water polo player in college.

She also had a passion for aviation and military, as her father was in the Navy and she got a thrill from watching the Blue Angels perform. When she went to college, she decided to follow the path of her uncle – a 30-year Northwest Airlines employee – so she studied travel, tourism and aviation. She began applying for jobs with airlines, first landing a job with SkyWest Airlines before joining Alaska Airlines in San Diego, then Santa Barbara.

Sheila loves that every day is different and has grown close with her team members, who were the only people she knew when she first moved to Florida.

“They are my family,” Sheila said. “They see it, they know it. I remind them of it. This is a special place.”

Sheila currently serves as the Tampa Airline Managers Association (TAMA) Chair and recently participated in TPA’s active shooter drill in which Alaska Airlines was a part of the exercise scenario. She has quickly gotten to know employees at other airlines as well as Authority staff, who know her for her warm smile and cheerful demeanor.

Sheila lives with her fiancé and labradoodle in Odessa and has three children: 19-year-old Gage and 16-year-old twins, Luke and Piper. She likes watching sports and is a huge Green Bay Packers fan.

She’s also been cultivating a green thumb, dabbling in gardening at home. One of her greatest gardening accomplishments is taking cuttings and carefully growing plumerias, which remind her of her second favorite place, Hawaii.