Ralph Anthony, the Aviation Authority’s new Deputy Police Chief, was a Charlotte High School student in Punta Gorda, Florida, when he decided to pursue a career in law enforcement.

As a cornerback for the Charlotte Fighting Tarpons, Anthony got to know a local police officer. 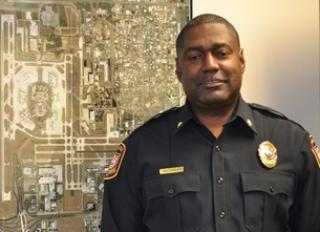 “He’d always stop and talk to us about our football games. He took an interest in us,” Ralph said. “One day I turned the tables and asked him about what it was like to be a police officer. He told us it’s a good career, it’s rewarding. You get to help people. Whenever you get paid to help people, that’s a good thing.”

What sealed the deal? Watching the TV show “Cops,” one of Ralph’s favorites when he was in the military.

“It helped me make a career decision,” Ralph said, with the easy laugh that punctuates much of his conversation.

The police force, though, would have to wait. Right after graduating high school, Ralph enlisted in the U.S. Army. His first time on a plane – or even leaving Florida - was when he was on his way to basic training in Ft. Still, Okalahoma. Shortly after that he boarded a plane to fly half way around the world to Korea, where he completed two tours of duty.

He later signed up for the Air Force Reserves, which took him to the Middle East where he served as a squad leader in Operation Iraqi Freedom. He retired from the military as a master sergeant in 2009.

“There was a rumor going around that we are going to Afghanistan,” Ralph said. “I was done.”

In 1992, while in the reserves, Ralph realized his dream of a career in law enforcement and joined the Naples Police Department. He started as a patrol officer, K9 handler and community police officer. In that role, he modeled his style after the officer who inspired him as a teenager.

“I always made a point to stop and talk to kids,” he said.

While in the reserves and working full-time, Ralph also earned a bachelor’s degree in Public Safety from Edison State College. He was promoted to Lieutenant in the Naples Police Department in 2010. He continued his schooling and earned a Master’s Degree in Criminal Justice from Florida Gulf Coast University in 2015.

He started work at Tampa International Airport in November 2015.

Still, he travels back to Punta Gorda once a month to attend services at St. Mary Primitive Baptist Church with his mother and sisters.

Here in Tampa, he’s looking for a bowling league so he can continue with one of his favorite past times. He’s now officially a Tampa Bay Buccaneers fan, and a USF Bulls fan. He wants to buy his sister, who has never left Florida, an airline ticket to a place where she can see snow. And he wants to make a difference at Tampa International.

“My goal here is to improve efficiency and increase overall safety,” he said. “We’re going to accomplish that through team work.”

Already, he said, he can see that he’s blessed with a great team.