Even before she started working at Tampa International Airport, you might have seen internal auditor Nicole Reynolds on top of the Short Term Parking Garage with her husband, watching planes taking off and landing after having dinner in the Main Terminal.

“It’s a fun date,” reasons Nicole, who joined the airport team about 18 months ago. “Even now during my lunch break I’ll sneak up there and watch the planes. It’s so cool.” 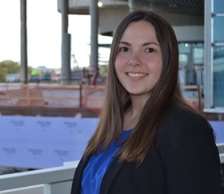 The fascination, perhaps, dates back to one sunny Saturday morning when she was 16 and piloted a Cessna 172 as part of the Experimental Aircraft Association’s annual Young Eagles event. That was shortly after she learned to drive a car. She remembers the instructor telling her to just follow the ribbon of road beneath her.

“I had driven on that road before so it was really neat to be flying above it,” she said.

It so happened a reporter was covering the event and a picture of Nicole at the plane’s controls was splashed across the front page of the local newspaper.

While in high school, she briefly played on the basketball team but redirected her energy to academics with an eye toward her future and career possibilities. Time on the math team and accounting electives set her on a solid professional path.

“I had a teacher I’ll never forget who told me, ‘Every business needs an accountant.  It’s job security,’ ” Nicole said.

It made sense. Her mother had earned a degree in accounting, and Nicole loved math.

“It’s the problem solving,” she said. “There’s a sense of accomplishment with that every time. I like being able to solve math problems and use that to help people.”

After earning her master’s degree in accounting at the University of South Florida, Nicole worked in public accounting for three years and then took a job doing financial reporting for a multinational insurance company. The financial reporting, though, took her away from her real love: Problem solving.

At the airport, her recent projects have included reviewing processes for the airport’s Owner Controlled Insurance Program and salvaging materials from construction sites; reviewing WMBE/DBE contracting; and auditing master plan construction contracts. She keeps her small office remarkably tidy, with no papers on the desk and neat stacks of boxes stuffed with records lining one wall. Posters promoting new TPA routes such as Lufthansa, Panama City and Cuba simply decorate two other walls.

Unlike public accounting, she said, working as an internal auditor at the airport gives her a sense of team spirit.

“Everyone here has really embraced what we’re doing,” Nicole said. “A lot of times, when people hear the word auditor they avoid them at all costs. They practically run down the hall to get away from you. Here, we’re all on the same team, working toward the goal of making the airport better. People know we’re here to help.”