(October 20, 2016) Whether it’s a leaky faucet, a broken doorknob, an office move, a chipped tile or sewage backups, Mike Davis is your man for the job. As a Tampa International Airport Maintenance Worker III, Davis can fix just about anything and everything both inside and outside of the Airport. 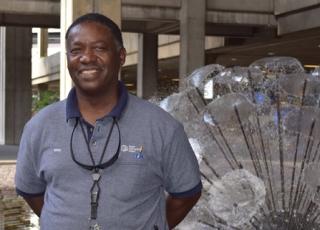 In his decades of experience of preserving, refurbishing and maintaining buildings and homes of all types and states of disrepair, there is little Davis can’t do. And if he can’t do it, he’ll learn how to do it. And if it’s difficult to learn how, he’ll come up with a system to make it easier.

A problem solver by nature, Davis figured out a better way to manage the Hillsborough County Aviation Authority’s entire system backflow valves, which control wastewater and prevent contamination to water systems. He created a numbered map for not only the 106 backflow points at TPA but also those at Peter O. Knight, Tampa Executive and Plant City airports as well.

He saves the maps in his phone and the maps are easily shareable among others in the Maintenance Department, making it easier and more efficient for others to repair plumbing issues at the airports, particularly in emergency situations. He’s been helping create similar maps for the new Consolidated Rental Car Facility, as well as for other systems, such as the elevators.

“In the past, you’d have one guy that knew where everything was,” Davis said. “This way, others can use the spreadsheet and maps to figure out what’s where.”

Davis, a Tampa native, said he feels fortunate to have worked at the Airport for 12 years, having started out as a Maintenance Worker I.

It could have gone in so many other directions.

As a 2-month-old baby, Davis was adopted by an elderly housekeeper who didn’t have children. She would bring him to her jobs, keeping him in laundry baskets while other housekeepers kept an eye on him. He remembers her kindness and compassion for others, and taught him that when someone was “being mean,” that meant “they were going through something.”

“I never wanted for anything,” Davis said. “If I saw a bicycle, I’d make a comment that I wish I had a bicycle. And then she’d get me one.”

At age 13, the woman died. For two months, he lived in his West Tampa home alone, going over to friends’ houses to eat dinner after school, then going home to sleep. One day he came home to find his home’s door locked. Confused, he learned from neighbors that he had been evicted.

Fortunately, another woman with three children took him in and raised him throughout his teen years. After high school, he joined the U.S. Marine Corps, which he found somewhat easy since he was used to obeying and following orders.

After five years in the Marines, Davis earned an associate degree in electronics, but found that well-paying jobs in the field were hard to come by. Instead, he began putting his hands to work, doing repair jobs and remodeling work.

He eventually landed a maintenance job with the Tampa Housing Authority, which manages thousands of public and assisted housing units. Making $4 an hour, Davis worked his way up to a supervisory role, and while he didn’t make much money, he took advantage of every learning opportunity he could. The Authority sent him to Miami for maintenance management classes, and he was trained in lead abatement and other skills. He won the Authority’s Harvest of Hope Award, given to outstanding employees, and even after leaving the organization at the end of his 14-year career there, he still did contract work for them for a couple of years.

Meanwhile, he began his own business repairing and remodeling foreclosed and abandoned homes. Wanting some stability and a change of pace, he joined the Aviation Authority 12 years ago and has enjoyed learning a whole new set of skills at an airport, such as repairing carpet or protruding metal in jet bridges and responding with urgency to broken door locks and other issues that could compromise security.

He’s also loved getting to know – and help – everyone around the Airport.

“We meet everyone eventually,” Davis said. “Whether you’re in this department or that one, or you’re Mr. Lopano, we’re like that uncle you always call on when you need something.”

Davis still helps run business with his family that does house preservation and maintenance for homes owned by banks. In what little free time he has, he loves to play chess. On his rare day off, he’s quick to call up a few friends, who are always up for a long afternoon of hanging out and playing chess, which he finds fun and relaxing.

Davis sometimes can’t believe his good fortune, having had such a rocky start in life. He has been married to his wife Mary for 32 years. The two have six children, 14 grandchildren, and most recently, Davis became a great-grandfather.