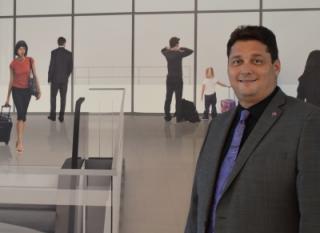 “I just thought planes and airports were so interesting and so cool,” Mark said. “I never imagined it was someplace you could work unless you were a pilot.”

Now in his 20th year at Tampa International Airport, Mark was recently promoted to Airport Operations Manager and has seen or worked with just about every side of the business. A true ambassador for the airport and the Tampa Bay area, Mark’s favorite part of the job is helping people who seem lost, directing them to places to stay and eat and generally making people feel safe and welcome when they arrive at TPA.

“It’s such a rewarding feeling to see that look in someone’s eyes when you’re the relief and refuge for whatever they’re going through when they land in an unfamiliar place,” Mark said.

It’s no mystery how Mark wound up with a passion for both helping people and working in aviation. Mark’s mother was a registered nurse and his father, also born and raised in Tampa, was a businessman who flew general aviation planes as a hobby.

After Mark graduated from Plant High School, he wasn’t sure what kind of career path he wanted to take. He only knew that he liked helping and solving problems. After attending Hillsborough Community College for a year, he decided the classroom didn’t feel very rewarding to him and he joined the U.S. Coast Guard. There, he was involved in various search and rescue missions and loved the research and investigative work involved in finding lost boats and loved ones.

After he left the Coast Guard, he joined TPA in 1996 as an operator in the Comm Center, now referred to as the AOC. He spent several years there, mostly in a supervisory role, and it gave him experience working with all of the airport departments in one way or another.

“In the (AOC) you have a global view of things at TPA and have your hands in a little bit of everything,” Mark said. “You learn about a how a lot of different things work at the airport, even if you’re not directly involved in them.”

He moved to the other side of Operations about eight years later, working as an Airport Operations Specialist overseeing the airfield driver program and assisting with the airfield security program. While working as an interim AOM in December 2013, Mark got a quick initiation into the world of crisis management when an approaching Cessna crashed during his shift. A Tampa Police helicopter was also nearby during the crash and helped extract the pilot, who survived.

In May, Mark was promoted to a full-time AOM. It’s a position he takes a lot of pride in doing well, often taking time to get out into different areas of the airport, meeting airline station managers face-to-face and seeking out passengers who need assistance.

“It’s such a dynamic profession,” Mark said. “Every day, you don’t know what you’re going to get, especially now with all of the construction. As an AOM, you’re rarely involved in the planning but you’re often responsible for the results.”

Mark lives in Temple Terrace with his mini Australian Shepherd CJ and has two grown children, 23-year-old Austin and 19-year-old Madison. In his free time, he loves boating, exploring Florida and bicycling around downtown Tampa. He also loves to do what he calls “food crawls” – like pub crawls, except sampling different tastes and dishes at local restaurants. He also travels with food in mind, sampling the off-the-menu items such as the Key Lime Cake at Firefly in Key West or devouring shrimp po-boys at Johnny's in New Orleans. He's looking for restaurant recommendations for his upcoming trips to Charleston and Savannah.

He’s excited about the future of TPA, especially as the Operations staff adds lots of new faces.

“We’ve got such a great group of AOS’s right now,” Mark said. “We try to pass along what we’ve learned to the next generation of airport managers so they can go on to apply these lessons either here or at another airport. They’re going to make great leaders in aviation.”