(August 4, 2016) When it comes to Tampa International Airport institutional knowledge, few have Cayman Airways Station Manager Joe DeCesare beat. He was here before many Airport employees were even born. 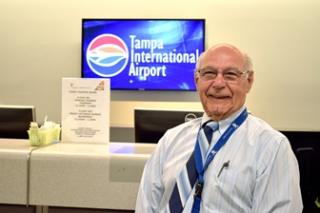 In fact, Joe was here before the Airport as we know it was born. He came to work at Tampa International Airport for Delta in 1965, when it was little more than a small building off Columbus drive with a parking lot and a handful of airlines such as Eastern and National serving passengers. He remembers watching the new TPA being built next door and recalls how stunning it was when it opened.

“It was definitely like, ‘Wow!’” Joe said. “Before that, we had never seen jetways or shuttles or anything like it. It was a whole new learning experience for the people who worked at Tampa International.”

Joe has watched a lot of changes in the airline industry over the decades – the Jet Age, bankruptcies, mergers, the 9/11 attacks – and none of deterred his love of working in airports.

After growing up in Rhode Island, Joe began working in 1957 as a Delta ramp agent at New York’s Idlewild Airport – later renamed John. F. Kennedy International Airport after the President was shot and killed. He had the opportunity to transfer to Florida in the 1960s and then began working for the low-cost carrier Air Florida in 1972.

“That was a good ride,” Joe said of his 13 years with the airline. “It flew everywhere east of the Mississippi, London, Zurich, Madrid.”

After Air Florida went bankrupt in the mid-1980s, Joe went to work for Cayman Airways, where he has been ever since. As one of TPA’s longest-running international service providers, Cayman Airways has had a lot of regular customers over the past 30 years, many whom Joe knows by name. Cox Lumber, which used to run one of the largest lumberyard operations in Florida, often had business people flying back and forth to the headquarters in the Cayman Islands, and Joe sees lots of regular leisure travelers as well.

“There have been some customers we’ve had where if I don’t see them for a month, I start to get concerned,” Joe said.

Joe’s office is located on the ground floor of the Marriott Hotel, where he houses a little museum of photos and memorabilia dedicated to his nearly 60 years in the airline business. He has several photos of old Delta jets and Air Florida planes, as well as various employees that have come and gone over the years.

Joe has two sons and two grandchildren whom he visits with regularly, and he lives in Clearwater. His wife, Ann, died five years ago.

Joe chuckled remembering how he met Ann as a teenager. A friend wanted to go on a date with another girl but had no car. Joe agreed to give him a ride, and the friend’s date brought her friend, the 16-year-old Ann, with whom he felt drawn to immediately.

“It worked out fantastically,” Joe said.

Joe has no plans to retire any time soon. He loves his job with Cayman Airways, and after Ann’s death, he appreciates his job, employees and customers even more.

“It gives me a reason to get cleaned up every day and get out of the house every day,” Joe said. “And this is such a nice airport. It makes it easy to want to work here.”

Cayman Airways is currently operating daily flights to the Cayman Islands through the month of August. On Friday, the airline will celebrate its 48-year anniversary with cake and refreshments at its Airside F gate.