Janet Wood discovered exactly what kind of work she wanted to do on the day when, as a teenager, she visited a law office.

“A business teacher sent me to a law office for career day when I was in high school,” she said. “It was luck of the draw. Other students went to other places. I was fascinated by what went on there.” 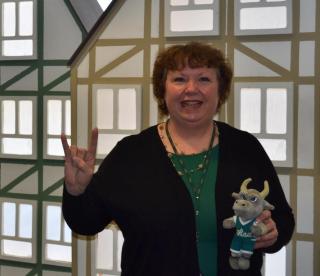 She discovered exactly where she wanted to work when she started her job at TPA 10 years ago. Wood is the senior legal administrator for HCAA.

“We’re very fortunate to be able to work here,” she said. “It’s a great place, both for the community and those of us who work here.

Every day of her job is different, she said, but it largely entails processing paperwork in preparation for board meetings, working on contracts for companies that provide goods and services for TPA, and preparing papers for legal proceedings. It was exactly the career she set her sights on that day when she was in high school.

“I knew I didn’t want to be a lawyer,” she said. “But I wanted to work in legal. I never thought it would be at the airport.”

She grew up on an Illinois farm, the youngest of seven children. She came to Tampa with her first husband, and earned a business degree from the University of South Florida. She split with her husband and raised their two children by herself through almost all of their childhoods. Her son, Matthew, is now 33, daughter, Jennifer, is 31. Wood also has two granddaughters, 9-year-old Eden is Matthew’s daughter, 3-year-old Alexis is Jennifer’s.

She worked in a law firm in Tampa while she was raising a family. Her kids were in their early 20s when she came to TPA.

Very soon after she started, her daughter was in a bad car accident, and spent weeks hospitalized in critical condition. That’s when Wood realized she had a new family at TPA. “The people here were so wonderful,” she said. “I was the new kid on the block. They didn’t even know me. But they set up a rotation and they took turns cooking dinner for me and my family.”

She had remarried not long before she came to TPA. Her husband, Allan Wood, now works at the airport in currency exchange. Their schedules are very different, so they don’t see each other much at the airport, but outside of work they keep up an active schedule together.

“I took my kids to the lower 48 states when they were growing up,” she said. “We never made it to Alaska and Hawaii, but we did all the lower 48.”

She and her husband have taken more than a dozen cruises, but lately they’ve been concentrating on exploring Europe. Their next planned trip will take them to Prague, Budapest and Vienna.

As impressed as she was with the way her TPA family treated her when she first arrived, cooking meals for her while her daughter was recovering, she said she has become even more impressed through the years. In fact, she said, she has learned that the amazing support she received 10 years ago was not unusual at the airport.

“Many people here have a story like that,” she said.