After growing up in Sparta, New Jersey and graduating high school with good grades, Irene Pierpont moved to Florida with her parents and decided she wanted to take a break and take it easy for a while.  She didn’t want to go to college and had few ambitions outside of perhaps bartending one day. 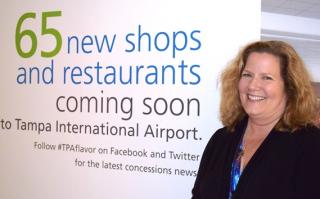 Three months of working at a 24-hour convenience store quickly changed her mind.

“I wanted to be self-sufficient and was not making any money,” Irene said.

She went to her parents, who nodded quietly when she told them she wanted to go to University of Florida to study business and then exchanged high fives of joy when she walked out of the room.

After graduating with a marketing degree, Irene climbed from an assistant mall manager position to the level of Regional Vice President for the nation’s largest shopping center developer during the first 10 years of her career. She moved nine times during her 20’s.

Prior to coming to TPA four years ago, Irene helped develop the cart and kiosk program at Denver International Airport, which leased to small and ACDBE businesses.

“I found the airport concessions industry to be fascinating,” Irene said. “It’s an untapped market of so much opportunity and it’s a different and interesting way to run a business.”

Irene is now in charge of implementing the concessions contracts for 65 new shops and restaurants opening this year and next. She loves helping new business owners learn the ins and outs of the airport concessions world and enjoys tackling all the challenges that come with putting the new program in place.

“Things pop up all the time that we hadn’t thought of before,” Irene said. “Our concessions handbook is regularly growing and improving as we go.”

Those who know and work with Irene love her sense of humor and easygoing demeanor. A huge animal lover, Irene was known during her time working in Ybor City as the “lady with the dog” because she carried her six-pound, red headed poodle Ruby with her everywhere she went.

Irene now has three cats and fosters her brother’s Labrador retriever, Maggie, and is extremely close with her family, especially her niece and nephews. Her father still lives in the house her parents moved into when they moved from New Jersey to Dunedin after she and her siblings finished high school.

Having once taken a year off from her career to tour Europe, Australia and California, Irene loves to travel, though she hasn’t had much time in between helping 65 new concessions launch at TPA.