If you’ve spent any time around Tampa International Airport’s Main Terminal, you’ve most likely noticed Dortresia Johnson. Tall, striking and always sharply dressed and accessorized, Dor – as those who know her call her – has a friendly smile that puts guests and coworkers at ease. 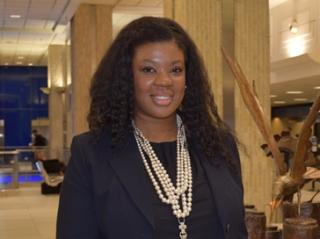 It’s no surprise that Dor worked as a fashion model for Home Shopping Network before joining Tampa International Airport as a Volunteer Ambassador three years ago and quickly being hired as a Guest Services Representative. She was recently promoted to Volunteer Services Coordinator, working with Guest Services Manager Scott and TPA’s 158 volunteers.

Dor said she feels at home at TPA and hopes to have a long career here.

“I love learning about the Airport and meeting new people, and I like the relationships I’ve built with coworkers and volunteers,” Dor said. “We’re family.”

It’s not what Dor set out to do when she graduated from high school in her hometown of Miami and came to Tampa to attend the University of South Florida.

She thought dentistry was her calling.

“I know it sounds strange but I always loved going to the dentist,” she said. “I loved the smell of the dentist’s office. My dentist I had growing up was always dressed really nice. I realize you can’t build a career on that, but I thought that’s what I wanted to do.”

Shortly into her first year of studies, she realized her personality and public speaking skills would be better suited for public relations. She graduated with a Bachelor of Arts Degree in Communication and Public Culture from the University of South Florida.

After graduation, she enrolled in the Fashion Institute of Technology in New York City, where she earned an Image Consulting Certificate. She moved back to Tampa and worked for Bank of America and the Girl Scouts of West Central Florida before she began modeling for HSN.

“I really liked the live aspect of modeling, and the challenge of always being conscious of the camera,” Dor said. But she was always looking for a more permanent career track.

Dor’s mother, who recently retired after nearly 40 years of teaching special education in Miami-Dade schools, is the one who pointed her daughter toward the Airport. Having just taken a class of children on a tour of Miami International Airport, she called Dor and told her, “This seems like the kind of thing you’d enjoy.”

Dor looked into it and learned that Tampa International Airport had Guest Services Representative jobs. After applying a few times unsuccessfully, she decided to volunteer to get her foot in the door, learn more about TPA and get to know some of the employees.

Three months later, she was hired as a full-time GSR.

“I would have been here a lot sooner if I had known this was even something that existed,” Dor said. “I love it here.”

Dor often visits her parents in Miami and spends her free time doing activities with her friends and her church. She belongs to a Christian sorority that helps guide younger girls through a mentorship program.

She still has a strong passion for fashion and loves to shop for shoes, clothes and jewelry. While she plans to spend a nice, long career growing with Tampa International Airport, she also has her sights set on a longtime dream: To one day open her own department store.