When David Gavenda first began working at Tampa International Airport in parking management, his family and friends were surprised. 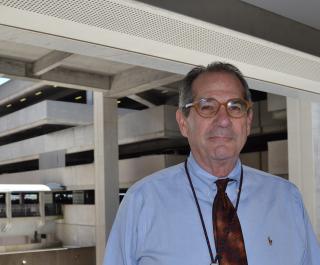 It’s not that they thought Gavenda wouldn’t do a great job. He’s savvy, smart and a hard worker. In 50 years, he has only used one sick day. Growing up, he had perfect attendance almost the entire time he was in school.

But those who know him well see him as more of a restless, adventurous, entrepreneurial type, not one to settle in any one place for too long. The airport, however, changed his ways a bit.

“This is a really good job,” said Gavenda, who came to the airport in 1999 and has been the Parking Manager for the Authority since 2007. “I’m happy to have it.”

Gavenda was born and raised in upstate New York. His mother was a registered nurse and his father was a small business owner, operating grocery stores around town. After graduating from high school, he co-owned with his siblings, some grocery stores for a few years until one sold and one burned down. He then decided to take a six-month road trip around the country, during which he got his first taste of Florida and loved it, but his brother convinced him to come back to Syracuse, N.Y., and open a restaurant.

After a number of years running small businesses up north, Gavenda got tired of the long winters and decided to move to Sand Key on Clearwater Beach in 1985. Two months after arriving, Hurricane Elena loomed near the coast and forced him to evacuate to Clearwater High School. But it didn’t deter him from putting roots in the Sunshine State. He got his real estate broker’s license and successfully sold real estate for a few years.

Gavenda also got involved in developing some restaurant concepts, one of which was (and still is) a well-known seafood chain, in which he met a lot of interesting people and investors. The chain tried to expand beyond Florida but failed, and Gavenda began to get the itch to try a new line of work.

“I decided that for the first time in my life, I would get a job,” Gavenda said. “I answered a blind help wanted ad in the St. Petersburg Times.”

It was for the parking manager trainee for Republican Parking System – ABM’s predecessor at TPA – where he very quickly learned the ins and outs of the parking business and began managing airport parking operations around the Southeast, including Louisville, Memphis and Jacksonville.

He was Republic’s general manager at TPA, overseeing 125 employees and an annual budget of more than $5-million a year, when Republic’s contract ended in 2007. The Authority hired him to keep his expertise on board as they underwent several changes and developments over the next eight years. Gavenda is excited about even more parking developments coming up, which he calls “the future of parking” – more automated lanes, parking reservations, pay-by-phone, Apple pay and other more customer-friendly technology.

Gavenda is responsible for keeping 23,000 parking spaces clean, collecting $60 million in revenue and getting 3 million vehicles in and out of the garages annually. He also came up with the idea of bringing in a car detailing operation at valet parking, which has been very successful.

“The idea came to me because I was spending a couple of Saturday mornings a month at the car wash,” Gavenda said. “I knew this was a service our customers would appreciate.”

In his free time, Gavenda still maintains some investment properties which he is currently trying to sell. He also travels a lot, often with his siblings and their spouses. He likes to visit events “where all the people are” as opposed to just places. He’s been to Rio for Carnival, New Orleans for Mardi Gras, has watched 4th of July fireworks atop the Washington, D.C.’s W hotel and took a cooking class in Florence. He’s also been to Thailand, Brazil, Mexico and other places around the world. Next, he just made reservations for the Kentucky Derby in Louisville.

Though he’s taken small “retirements” in between careers over the years, he doesn’t see himself slowing down and loves staying busy.

Gavenda said he has no plans to retire from working … ever.