For most of Danny Valentine’s young adult life, he pursued a single goal: To be the best possible journalist he could be. He was the editor-in-chief of his high school newspaper, spending many late nights writing all the articles, designing the pages and printing news for his fellow classmates to read. 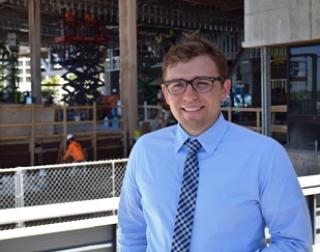 At the University of Iowa, he spent five years double majoring in journalism and biology while working for the college paper, the Daily Iowan. Right after graduation, he landed an internship covering breaking news at the Tampa Bay Times, which turned into a full-time job covering education.

Then in 2014, he began to have a change of heart. While he still loved being a reporter, he worried about the future of the industry and how it aligned with his own future, now that he had a fiancé and wanted a home and a family. He saw a public relations opportunity open at Tampa International Airport, which was undergoing a massive expansion and needed someone to handle communications for the various projects and developments.

Danny interviewed with several employees at TPA, including members of the Planning and Development Department and those close to the various construction projects launching at the Airport, as the job was created specifically to handle communications for the Master Plan.

In October of that year, he joined TPA as the Communications Manager, writing press releases and progress updates, handling ribbon cuttings and press conferences unveiling new designs and finished projects, documenting milestones, producing a Master Plan newsletter for the contractors and workers and pitching stories to the media about the latest developments at the Airport.

It’s been an interesting and fulfilling change, Danny said, and one he never thought he’d enjoy so much.

“You spend your whole life in single pursuit of one thing and then suddenly you’re on the other side,” Danny said of his switch from journalist to spokesman. “I’m very happy here. It’s challenging, it’s busy, still get to work with journalists. There’s just a great energy here right now.”

Danny was born and raised in Iowa City, Iowa, the single child of two University of Iowa professors. His mother taught nursing and his father taught engineering, and as the only kid growing up among aunts, uncles and grandparents, he admits he was a tad spoiled.

“I just remember at Christmas, gifts would be piled up to the ceiling for me,” Danny said.

He always loved writing and was good at biology, hence his studies in college, though he soon realized science writer jobs were few and far between after he graduated so he pursued any type of journalism he could.

While an intern at the Times, Danny met fellow intern Ileana, whom he married last year on Valentine’s Day in Miami. Ileana now works in marketing for a local law firm, produces a cooking blog called A Little Saffron and writes stories for the Times’ food section. The two recently bought a house in St. Petersburg and they love to cook, try new restaurants in town and work on home improvement projects.

“My life has changed a lot since coming to the Airport,” Danny said. “I got married, I bought a house. It’s like a new chapter of my life and it’s been really good so far.”

Danny is an avid tennis player and also runs and does a lot of traveling, mostly to friends’ out-of-town weddings lately. When he’s not traveling, he’s spending all of his money at the Airport Starbucks and Home Depot, he said.

Danny still loves journalism but has no regrets about leaving the field, as his work at the Airport teaches him new things every day, much like he felt as a reporter.

“When I came here, I didn’t know what SIDA was,” he said. “I didn’t know the difference between tower crane and a crawler crane. I like that I can tell people things about the airport, like how many power outlets we’re installing and how great the new people-mover is going to be.”

Danny also likes helping others at TPA understand the role journalists play in helping tell the Airport’s story, and he appreciates the parts of his job that still feel a lot like his days as a reporter.

“As the Communication Manager here, I still have to react quickly to news and turn stories around on short deadlines,” he said. “You have to ask a lot of questions, you have to be accurate and you have to always tell the truth.”