Connie Mundzak never really aspired to a career in procurement. In fact, she allows that it’s not the kind of career that anyone is likely to aspire too. 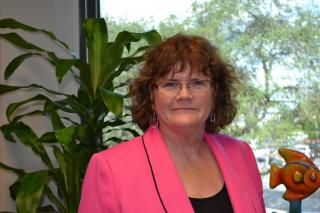 But there’s enthusiasm in her voice when she starts talking about her job at  TPA, where her title is Senior Manager, Procurement for HCAA.

“It’s like the best of public and private sector work,” she said. “In my previous jobs in the public sector, people worked a lot less and spent most the of the time complaining about their jobs. Everyone here has a great attitude. They work really hard and it’s a great atmosphere.”

Mundzak is a native of South Tampa. She graduated from Plant High School and now lives in the Westchase area. She’s lived in Tampa almost her entire life, except for her college years and a brief stint in Texas.

She earned her bachelor’s degree in psychology at Judson College in Alabama, and then married and moved to Abilene, Texas where she worked in the accounting department at a television station. With little to do in Abilene, she returned to college and earned her master’s degree in business and communications.

After that she moved back to Tampa with her daughters and went to work for the Division of Blind Services and then the employment and training department at Hillsborough County. When a position in procurement with the County opened up, the appeal of getting involved in business processes prompted her to go for it, even though she had no background in procurement.

“I basically sat down in my boss’s office and I didn’t leave until I convinced him that I could do the job,” she said. “Then I learned the job by doing the job.”

When she learned of an opening in the procurement department at the airport, she determined it would be a good fit and decided to go for it.

“I talked to people who worked at the airport and it seemed fast paced and more energetic than what I had experienced in the past,” she said.

That was more than 14 years ago, and she hasn’t looked back.

While the world of procurement isn’t filled with thrills, Connie makes up for that in her off time.

About five years ago, her husband Chet – to whom she’s been married for 21years – called her at work.

“He was at the Harley shop,” Mundzak said. “He told me he was going to buy one. I rode on the back a few times and then I said, ‘That’s enough of that.’ ”

She bought a Harley of her own. Now the Mundzaks spend a lot of weekends riding their Harleys together. She also recently started taking fencing lessons. When she’s not riding her motorcycle or engaging in sword fights, she enjoys spending time with her daughters, Jessie and Jennie, and her granddaughters, Mollie and Katie.

“We play princess a lot,” Connie said. “Being a princess is very important to them.”