(Ocotber 6, 2016) Those who have been around Tampa International Airport for a while or worked with Southwest Airlines have most likely seen Alison Hoefler’s friendly face around the airport, or perhaps around town. As the Regional Leader in Community Affairs & Grassroots under the Communication & Outreach Department, Alison is responsible for building relationships in the state of Florida and connecting with community and civic groups for TPA’s most popular carrier. 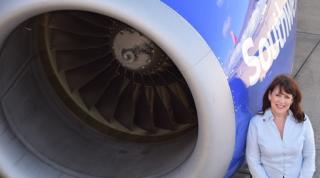 Having worked for Southwest for 20 years – 16 in Tampa – Alison is a true ambassador for the Southwest brand, and is a big fan of her home airport. She does a lot of traveling, both around Florida and around the country, and has watched the airline grow along with TPA over the years.

“I’ve held positions at Southwest and loved every one,” Alison said. “My various jobs have afforded me some fantastic opportunities and too many extraordinary moments to mention.”

This includes an upcoming special moment in history for both the airline and TPA: Southwest will soon land its first flight to Cuba, making Havana Southwest’s 100th destination city.

Alison’s job has allowed her opportunities to connect with the community, as well as with organizations and groups throughout the country and the world, in ways she never dreamed.  She’s thrown the first pitch at a Tampa Bay Rays game and acted as assistant coach alongside Nolan Ryan in an employee softball game at Orlando’s Wild World of Sports. She has attended a presidential debate and was proud to be part of the unveiling of “Florida One,” a plane painted with the Florida flag, at TPA.

“One of the responsibilities our team has in Community Affairs & Grassroots is to partner with national organizations who are aligned with important issues such as education, human rights or advocacy,” Alison said. “A recent special experience, as part of my affiliation with the Barbara Bush Foundation for Family Literacy, was spending a weekend full of activities in Kennebunkport, Maine to celebrate the former First Lady’s 90th birthday.  It was an experience I won’t forget.”

Alison also helped with the grassroots efforts to repeal the Wright Amendment and was in Dallas to witness the day the restriction from Love Field was lifted, allowing Southwest to fly nonstop to Dallas Love Field, where the airline is headquartered.

“What I love about my job is that no two days are ever alike,” Alison said.

Alison was born in Rochester, New York, and her father’s job kept her family moving often, spending time in Chicago, the New York City area and Texas. Alison graduated from Texas Tech University. She worked as a travel agent for an independent agency before joining Southwest Airlines as a customer service and operations agent. In the meantime, her parents moved to the Tampa Bay area, so she would visit Tampa often.

In 2000, Alison became the Area Marketing Manager for Florida so she permanently moved here and has loved being a Floridian ever since.

While Alison enjoys taking advantage of the travel perks of working for Southwest and likes to visit new and exciting places, one of her favorite things to do when she’s not working is to relax at the beaches here in the area.  Another relaxing past time for Alison is baking.  “It’s therapeutic!”

Last Thanksgiving she made 18 different pies and desserts for a large family and friends gathering.  Needless to say, everyone brought home dessert leftovers.

Alison said she’s excited for what the future holds, both for Tampa International Airport and Southwest Airlines, and is looking forward to the upcoming service to Havana and forming new and exciting partnerships.

“It’s a great time to be working at Southwest Airlines,” Alison said.