Adam Bouchard’s road to becoming an Airport Operations Manager at Tampa International Airport was somewhat unconventional and even unexpected, though now he says he feels “very blessed” to have landed here. In fact, he could probably write a country song about his journey – and a very good one at that.

Growing up with his triplet brother and sister and older brother in a small rural California town in San Diego County, Adam was homeschooled with his siblings. Their mother kept them on a very structured lesson plan and they would have “Saturday Civics” political and historical discussions with their father, a “serial entrepreneur” who ran restaurants and stores. 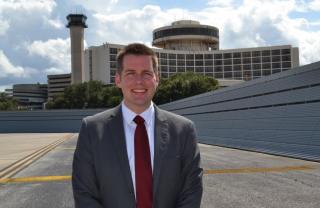 They were also a very musical family, with their mother playing piano, Adam’s brother playing drums for the church band and Adam playing guitar and singing. After Adam got his high school diploma at age 16, he went on to pursue singing and songwriting in Nashville for a few years. He traveled often, with his airline of choice being American Airlines.

In fact, he loved American Airlines so much he wrote the CEO of the company and asked for a job. The next thing he knew, Adam was a station agent for the airline’s regional branch, American Eagle, in Nashville.

He quickly worked his way up, moving to Los Angeles as a customer service manager at LAX, where he worked under now-TPA Vice President of Operations and Customer Service John Tiliacos. A year later, he moved to Chicago to be a manager of customer care at O’Hare International. His fascination with airports and how they run day-to-day operations grew with each experience and he became curious about what it would be like on the airport side, rather than the airline side.

“I’ve always wanted to learn as much as I can about airports,” Adam said.

He got his chance this year when he learned of an opportunity at Tampa International Airport to work as an Airport Operations Manager. He interviewed with Operations Director Lloyd Tillmann, and in June, he moved down here with his wife and new baby.

Though he had a lot to learn about airport operations, his customer service skills were a perfect fit to manage the airport’s noise abatement program and forge relationships with the neighbors who live in noise sensitive areas around TPA.

“I’m on cloud nine learning so much from one of the best airports in the country,” said Adam, who joined shortly before TPA passed its FAA Part 139 inspection with no discrepancies. “So much rests on the AOMs for keeping the airport safe, and I’ve enjoyed being such a big part of the noise compliance program.”